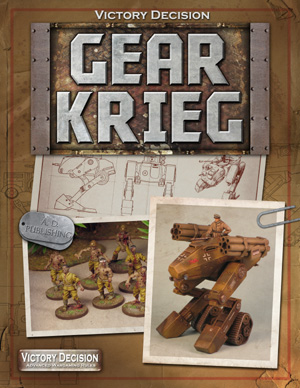 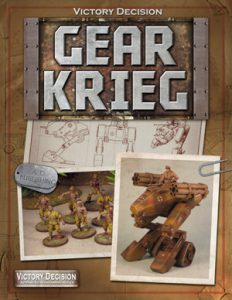 Dream Pod 9 has more great news for the holidays, our partners over at A.D. Publishing have just released a New Gear Krieg Rulebook, as an eBook, for their Victory Decision Game System.

This book provides the full background to the Gear Krieg Universe and covers all the unit descriptions, pictures and stats for all the Gear Krieg models that are currently produced by Dream Pod 9. From German Rockettroops, Zombies, Panzerkämpfer, Japanese, British and US combat walker, the US aerial Infantry, to Soviet Superheayv tanks – everything is in this book. 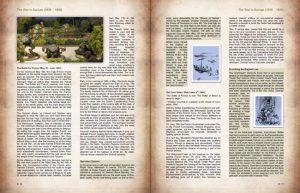 The rules cover individually based infantry miniatures and also group- or multibased miniatures, aka Infantry Stands. While designed with 20-28mm miniatures in mind the Victory Decision game system is flexible enough to handle any miniatures from 6mm to 32mm. So whatever your existing miniature collection consists of, you can start playing right away.

This rulebook not only provides 7 generic Scenarios and 3 historical Gear Krieg scenarios but also Point based Army Lists for British, German, Japanese, Soviet and US forces. 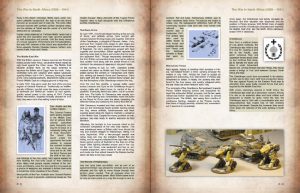 All necessary Game Markers are also included within this book.

As with all our ebooks you will get in fact 2 books:
– a full colour version with many high quality pictures of fully painted models
– in addition a B&W text only printer friendly version
Gear Krieg the biggest book I have done so far, over 200 pages. Best thing – everything is 100% compatible with all previous Victory Decision WW II books.

A print on demand version will be available in early 2013.

The eBook is available now for $22.49 on Wargame Vault at the follow link: