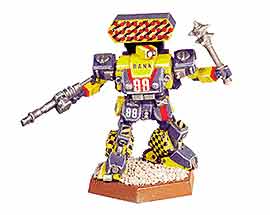 Dueling and arena combat have been part of the Heavy Gear universe since the very beginning. The concept of five-meter tall combat walkers yielding swords and staffs the size of telephone poles had a graphic appeal, to say the least. The Terranovan dueling traditions and cultures were extensively covered in sourcebooks, notably the aptly-named Duelist’s Handbook and the Tactical Dueling Rules. Dueling was thus chosen as the focus of the television series: it became the giant robot equivalent of present day wrestling shows, complete with larger than life characters, convoluted storylines and non-stop Gear-bashing action!

Dueling Gears are heavily modified for improved performance: super-charged engines, high-speed actuators and hyper-accurate gyroscopes replace the stock parts, allowing the pilots to pull incredible moves and maneuvers. Even machines that are not normally thought of as nimble, such as the Kodiak and King Cobra, see a significant improvement. For safety purposes, most Dueling vehicles receive additional armor and bracing around their cockpit and main body. To top this off, they all carry customized weapon payload to maximize their effectiveness on the field! We wanted to see what you’re fighting with on the miniature tabletop arena. We got some of the wildest, wackiest, most creative reconfigurations, kitbashes and customizations one can come up with!

And now, the moment you’ve been waiting for… announcing the winners!