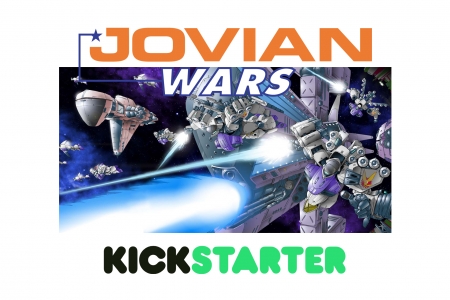 Dream Pod 9's second Kickstarter is to make a series of new high quality resin spaceship miniatures for the Jovian and CEGA factions of its Jovian Wars – Tabletop Wargame is now live. The new spaceship miniatures will be 1/4000 scale (about 3" to 5" in length) with the larger parts cast in high quality grey resin, smaller parts like the weapons and engine fins cast in pewter. They will each include a stand that will be laser etched and cut clear acrylic base with clear acrylic post. Checkout our proof of concept photo below with the remastered Poseidon for CEGA and Valiant for Jovian, to see how the final spaceships will look on their acrylic bases and acrylic rods, shown with a few of the pewter fleet scale exo and fighter squads primed in grey on their bases in front.

We are making all the new ships modular with standard connection points between the parts. Easy assembly is our goal with Engines, Cargo, and Habitat sections that have a large peg in the front to match holes in the back of the Cargo, Habitat and Forward Hull sections. We have also added small centered pilot holes on all the large pegs and in the holes for easy drilling and pinning of the parts if the players want. Plus we have standard pegs on the sides of the forward hull sections to mount weapons, which all have matching holes in their underside. We even have these same standard pegs on the sides of the habitat ring or pod sections so players can customize their ships with small cargo containers and other parts, that are planned as stretch goals during the Kickstarter.

Here is a link to the Jovian Wars Kickstarter page to go check out the nice intro video we made and show your support for the Jovian Chronicles Universe.