The mold production company is back at work on the plastic injection mold plans after the Chinese new year holiday earlier this month. They sent us the Mold 1 (Cuirassier, Chasseur, Warrior IV, and Warrior robot sprues) and Mold 2 (Chevalier, Jerboa, Crusader IV, and Skirmisher robot sprues) plans to look at. We are checking them over with our 3d modeler, before they get approved and production of the steel mold plates begins. Below we have graphics of the various mold plates, where the actual robot sprues are cavities in the plates and all text is reversed. Also there is an image on the Cuirassier graphic showing the plastic robot sprue with injection runners, where the molten plastic get injected to make the sprue. And an image on the Warrior graphic showing the robot sprue, injection runners, and the ejector pins that will push the injection runners and plastic robot sprue out of the mold after the plastic has cooled.

We got the vulcanized rubber molds made for the Peace River Spartan Two Pack pewter minis and the NuCoal Arbalestier Pack pewter mini. Checkout the preview photos below of the assembled Spartan Two Pack pewter minis and their parts below. Followed by photos of the assembled Arbalestier pewter mini with standing pose legs and with running pose legs and their parts. If you have an Arbalestier as and Add-On reward and would like a specific pose (Standing Legs or Running Legs) you can email Robert at rdubois@dp9.com with your Backer Name, DP9 Pledge Manager Order #, and which leg pose you would like and we'll get it noted on your order sheet. Otherwise we will randomly select one of the 2 poses for your backer reward package, if you ordered two we'll include 1 of each pose.

We hope to have the Mold 3 plates files with the Utopia Robots to look at in the next week. Once we have them we'll make an update on the Utopia Forces Kickstarter to show everyone how they look. 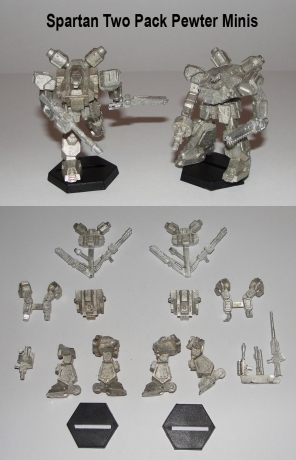