Home » Blog » News » Various Dream Pod 9 and Player created Facebook Groups, the DP9 Forum, and Links to Check Them Out! 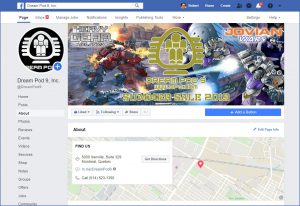 We’ve had a few requests to know what Facebook Groups are out there for the various DP9 game systems and universes. DP9 post regularly to its Facebook page at www.facebook.com/DreamPod9 and has a few groups it takes care of, like our Pod Squad demo teams with the main group called Pod Squad and sub-groups for different locations like Japan and others. We also post all Dream Pod 9 news to the our website at www.dp9.com and to our Forum at www.dp9forum.com. The DP9 Forum is also the official place to discuss rules, both new (Friday Feedback) and old for our various games. Its also the place we post upcoming game demos and conventions we or our Pod Squad members will being attending. Plus its where we host our annual Golden Gear and new for 2019 our Golden Exo miniature painting contests.